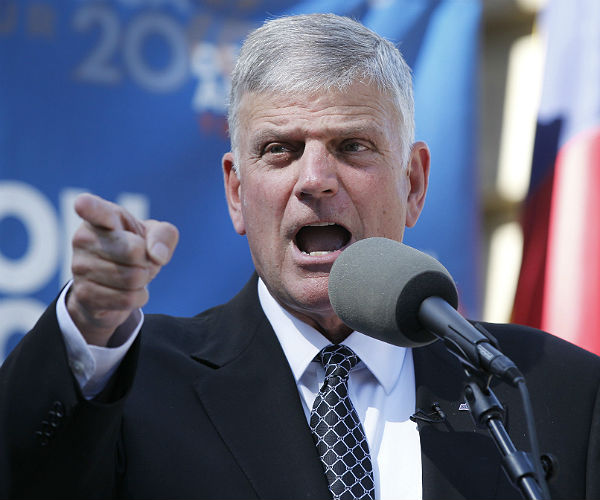 “But the God of the Bible says that what one does in private does matter. Mr. Clinton’s months-long extramarital sexual behavior in the Oval Office now concerns him and the rest of the world, not just his immediate family. If he will lie to or mislead his wife and daughter, those with whom he is most intimate, what will prevent him from doing the same to the American public?” Franklin Graham, 1998

“…there’s such bigger problems in front of us as a nation that we need to be dealing with than other things in his life a long time ago. I think some of these things — that’s for him and his wife to deal with… I think this thing with Stormy Daniels and so forth is nobody’s business.” Franklin Graham, 2018

Some of my views have changed. I always thought that I was exempt from having an affair, that I was way too good to make that decision. I know now that avoiding an affair requires more than being good, but also being intentional. It means working on your marriage. It means recognizing that divorce can happen. It means being willing to be happy.

But more than simply talking about avoiding affairs, I have thoughts about the aftermath of an affair, and what infidelity means when you have a public presence.

I’ve read through the first article from Franklin Graham, linked above. In it, he eschews the idea that one’s private actions are not of public concern, particularly when one is in a position of power. He said that President Clinton could not use doublespeak and that forgiveness is available to those who are repentant.

I’ve also listened to the interview linked above where Graham says that President Trump’s affair with Stormy Daniels is nobody’s business, and that America (no mention of himself) was wrong to go after President Clinton back in the day.

The truth is, even if you’re someone who is seemingly without shame like Trump, an affair coming to light is embarrassing. A secret that you don’t want out is no longer under wraps. You feel better exposed and you know that exposure hurts people that you probably care about.

And if someone you like or admire is caught in an affair, it’s natural to want the best for them. To want to cover their shame, to erase that part of them that is hard to like or admire. So moving from a position that included “what one does in private does matter” to a position that says an affair is “nobody’s business” is completely understandable switch for Graham.

But I believe that 1998 Graham is the right one. Not the blatant partisan politics driving the statement, but the statement itself.

Because when I am forced to acknowledge my choices and the way that they hurt others and myself, I am able to find healing. Repentance and forgiveness help us and strengthen us. Bringing what is hidden to light allows us to face shame and overcome it. Acting with honesty after dishonesty allows us to begin the process of restoring trust.

When we say that these things need to remain hidden, need to be passed over, need to be ignored because they’re nobody’s business, we deny people the opportunity for healing. When we offer people judgment free spaces to be honest about their mistakes, we offer hope to those who have had the same experiences, and may prevent others from making the same detrimental choices.

Public people have a unique opportunity to teach when they are successful, but also when they stumble. Seeing our leaders model honesty, humility, and repentance in the face of their embarrassing secrets allows us to see the strength that is inherent in vulnerability. Denying leaders those opportunities by sweeping them under the rug or issuing mulligans keeps all of us from growth. It may seem like we’re trying to avoid shame, but it amplifies shame for many.

Franklin Graham was right to laud his father’s consistency in his private and public life. And if he wants to be a friend and spiritual advisor to President Trump, he would expect the same.