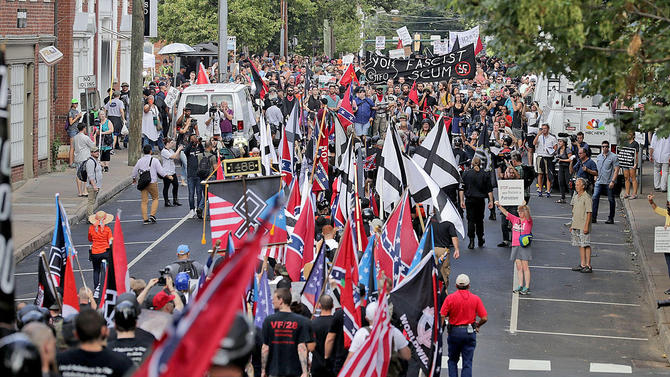 I spent much of the weekend glued to my phone, watching what was happening in Charlottesville, VA. From the torch wielding march on Friday night, to the murder of Heather Heyer on Saturday, to the original lackluster response from the president, the events of the weekend consumed me.

The naked, unmasked hatred on display shocked me. What upset me eve more, however, was the intense amount of hedging I saw from other white people. Taking a cue from the highest office in the country, I saw instance after instance of “on many sides” being spoken.

You don’t get to blame say, “But they shouldn’t have removed the statue of the Robert E. Lee because of possible repercussions.” This isn’t “removing history,” it’s removing a celebration of someone who fought against the United States in favor of slavery. Those statues are traitorous and racist. Statue removal is not to blame for white supremacy.

You don’t get to say, “But what about reverse racism.” First of all, reverse racism is not a thing. But even if there are instances where a person of color has something that a white person doesn’t, that doesn’t excuse hundreds of young white men marching around screaming “blood and soil!” Reverse racism is not to blame for white supremacy.

You don’t get to say, “But the antifa activists are just as violent!” If you’ve ever suggested that students need to arm themselves against Muslims so you can end them because you see them as a threat, you have already stated that you think violence is an acceptable response to a threat. If you support the NRA’s violent rhetoric, you have stated that you believe force is acceptable when dealing with threats. We can certainly have conversations about the use of force to take down a threat, but unless you consider yourself a pacifist, you can’t talk about how the antifa are responsible for violence. Antifa is not to blame for white supremacy.

You don’t get to say, “But I need time to process what all of this means.” While it’s true that knee-jerk reactions aren’t generally advisable, we can safely condemn overt, blatant racist behavior without the passage of time. We may take time to craft a more nuanced condemnation, but when we see something deserving of our ire, we can voice our disdain immediately. Calls for a quick response are not to blame for white supremacy.

Every time we add a “but” in our conversations about white supremacy, we make ourselves an ass.