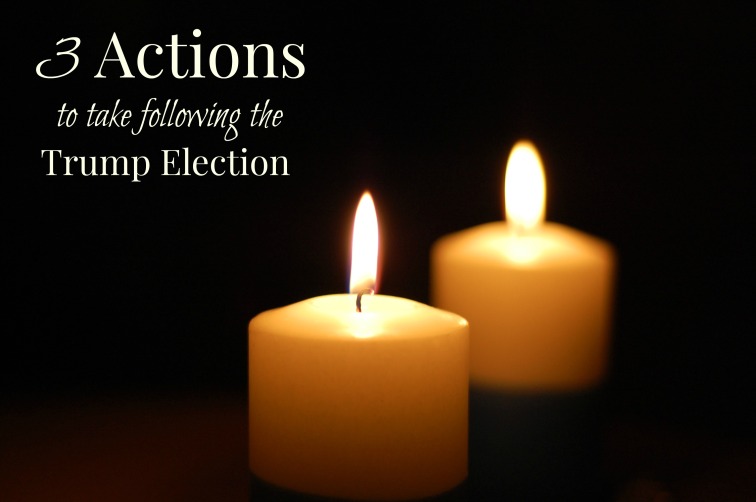 It’s been three weeks since the election, and it’s been hard for me to think much about writing. I’m still processing a lot of what happened, and I’ll be honest, it’s not always going great. I’m deeply saddened by it on levels that are still revealing themselves to me. I don’t know if I’ll ever get to a place of understanding how this level of hatred, fear, and incompetence has risen to the level of president.

In the days immediately following the election, I felt deeply overwhelmed. My kids were (and still are) deeply upset and fearful about how a Trump presidency would affect them. I have a few LGBTQ kids in my family, and when anti-gay hate group leader Ken Blackwell was tagged to lead the domestic policy end of the transition team, their fears seemed to have some basis. We’ve watched white supremacist Steve Bannon elevated to the position of Chief Strategist. Just this morning we watched the President-Elect tweet that flag burners should be jailed or lose their citizenship. The “drunk uncle” has been given the most powerful position in the world and we don’t have the tools to deal with it because most of the time we just block him on Facebook and avoid family reunions when he’ll be around. We’re not equipped to have his YouTube channel as our primary means of governance.

There’s a lot of madness out there. And by “out there” I mean, “right here in our country.” Overwhelmed seems to be the word of the day for a lot of people, especially minority groups and those close to them.

When I start to feel like everything is just too much, my tendency is to just shut down. Time to bake cookies, binge watch Breaking Bad, and ignore everything that’s happening. After all, I’m just a mom in West Virginia. People aren’t listening to me. And there’s an element of truth to that. I’m not a powerful voice. I can’t change the outcome of the election. I can’t change the political appointments made. There is very little on a national level that I can affect in any way.

So here are a few things that I’m doing already or will be doing in the coming weeks and months and years.

These things aren’t sexy. They don’t make for great Instagram pics or even really blog posts. There’s nothing terribly big and bold about these actions.

But these are primarily positive acts. Fear, hatred, anger – these things can motivate for a while, but they become wearing. They grind away at our humanity and leave us feeling lethargic and beaten down. They only add to the darkness. But when we fill ourselves with light, there’s no need to battle darkness. It simply can’t occupy the same space.

Find ways to bring light. This world and your own little corner of the world need it.

One thought on “3 Actions to Take Following the Trump Election”