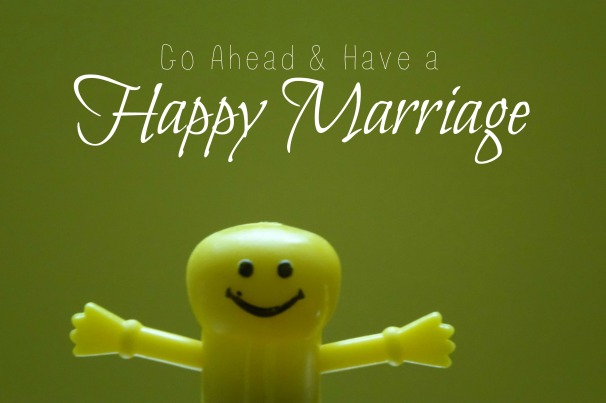 I read another article yesterday stating that marriage isn’t about your happiness. It’s not a new idea – lots of people have floated that idea before. Maybe I’m not a reliable source, since I ended my first marriage, but I just can’t buy these words from Debra Fileta:

Marriage is not about your happiness, it’s not even about you. It’s about love—which is something we choose to give time and time again. It’s about sacrifice, serving, giving, forgiving—and then doing it all over again.

No wonder we choose divorce over commitment. Because often, we’re choosing “personal happiness” over real commitment, over real love.

In my first marriage, I lived by the creed that my happiness was unimportant, that self-sacrifice was the way to a successful marriage, to the point that even when he told me that he was an atheist without involving me in the previous year-long process, I simply accepted it without examining how it made me feel. I was so accustomed to putting my own feelings on the back burner that any negativity I felt was simply shoved away to keep the peace. I thought that this kind of sacrificial service was a more “real” version of love. Because real love didn’t care about emotions, it was better not to bother with emotions at all.

In my previous marriage, I spent the better part of a decade finding personal happiness in relationships outside of my marriage, because there wasn’t much happiness to be found inside. I spent nearly all of my time online with people that I had met through writing, or with friends I had made through parenting or church groups. I instinctively knew that happiness mattered to me, and I found it where I could.

When we tell people that happiness is unimportant, we ignore one of the best tools to gauge the health of a marriage.

The truth is, those relationships that were outside of my marriage weren’t always rosy. Even in the years when Rich and I were friends, we had difficult patches. Times when we didn’t communicate well, times when we just weren’t very happy. But because there weren’t limits on how our emotions gauged the overall temperature of our friendship, we could use that to adjust the areas where we were unhappy, and strengthen the friendship. This was true of all of my outside relationships. I was able to use happiness not as the measure of whether a relationship was worth keeping, but rather as a way to determine the health of that relationship. And yes, relationships that left me consistently unhappy needed stronger evaluation, and sometimes they needed to be left.

In the article quoted above, the author writes, “They tell us to do what feels right, and not to tolerate anything less. They fool us to thinking that love is about doing what makes us happy. And the second we feel less than happy, they encourage us to bail, to abandon ship and to stop investing.”

I don’t know who the mythical “they” are as mentioned here, but I don’t think that there are many who would agree that the first time we feel unhappy, we should abandon any relationship, let alone a marriage. Most adults recognize that any commitment will have periods of disillusionment and disappointment, neither of which are hallmarks of happiness. Most people understand that generosity is a key to any strong connection. Most recognize that there are times when the needs of others come before our own. Marriage takes work, and work isn’t always happy. However, work that is always unhappy indicates that there are larger problems. Ignoring emotions can lead to ignoring deeper problems, and ignoring deeper problems can lead to the breakdown of a marriage.

Self-sacrifice is essential in doses. It reminds us that we are part of something bigger and helps us to grow as people. Non-stop sacrifice, on the other hand, leaves you depleted. It leaves you worn-out and small.

You only have so much self to go around, and when there is no you, there can be no we.

My marriage isn’t only about my happiness. I do, however, want to have a strong marriage, and if my happiness is a tool to show me areas where our marriage is weak, then by God, I’ll go ahead and have a happy marriage.

2 thoughts on “Go Ahead & Have a Happy Marriage”